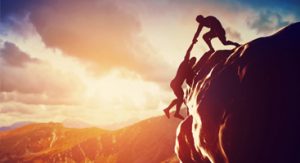 Feel free to contact me for more information about my leadership consultant services and adult learning activities that encourage ethical intelligence in leadership.

I’ve enjoyed the unique opportunity of living through and experiencing the last half-century of leadership theory and practice evolution. When I began my business career, most business leaders were members of the greatest generation. They had come of age during the war years and served either in World War II or the Korean conflict. Whatever leadership training these men (there were few women), possessed came from the military—think George Patton and Douglas MacArthur leadership styles. That style was what you might expect. It was authoritarian, positional, and highly structured. You were a cog in a machine. You did what you were told, kept your nose clean, and aspired to the next level on the organization chart.

Since that fortunate first encounter with “leadership”, I’ve had the privilege of leading dozens of teams and organizations. I’ve seen many leadership styles come and go, including charismatic, transactional, transformational, authentic, and servant, just to name a few. I think you can discern some of what I’ve learned from the contents of this book. There’s more I have yet to learn about leadership, but one thing I already know for certain—leadership is all about relationships.

Leadership is a privilege. It draws its power and authority from those who are being served by the leader. Yes, that’s right—from those who are being served. This is the exact opposite from the leadership style I first learned as a young professional. Back then, as a follower, I was the servant, an unhappy one at that. It was wrong then. It’s wrong now. Leaders must relish the opportunity to add value to those they lead. And, although it’s important, I’m not just talking about financial value.

I’ve led dozens of organizations where my leadership added financial value. That’s the CEO’s, or any leader’s job, but it’s not the only job. It’s just the starting point. Leaders are called to serve a purpose higher than themselves. Generating financial wealth, for yourself or others, doesn’t qualify as that higher purpose. Don’t get me wrong, everyone needs financial sustenance, some of us more than others. But that sustenance is just the floor. It’s the minimum. It’s just the first step in your climb to success as a leader. You must serve others by helping them better their lives and the lives they touch.

Here are the ways we can help you and your team. Or, get started now.