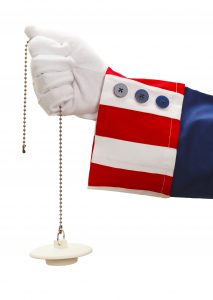 During the recent American presidential campaign, we heard a lot about an old phrase, “draining the swamp.” I say this is an “old” phrase because it’s been around a long time and is usually invoked metaphorically and pejoratively. So, what is a swamp? Why are swamps undesirable?

The dictionary definition of a swamp is pretty benign—“a tract of wet, spongy land, often having a growth of certain types of trees and other vegetation, but unfit for cultivation.” So, swamps are unfit for cultivation. Swamps are often also home to poisonous snakes, alligators, and various assorted fauna, some of which may be hazardous to human life. In modern times, swamps are also potentially full of toxic chemicals, human excrement, and other forms of harmful substances.

So, for the moment, let’s assume that swamps are undesirable and should be cleaned up, that is “drained.” During the presidential campaign, the swamp of reference was Washington DC. Many Americans believe Washington is a swamp because it’s inhabited by snakes—politicians and lobbyists, human excrement—liars and thieves, and toxins—bribes, cronyism, and secret deals. I’ll let you decide if this is true. But, if it is, it should be drained.

Do you have any swamps in your life that need draining? Some of these potential swamps may include a troubled marriage, toxic family relationships, a dysfunctional organizational culture where you work, or a harmful personal lifestyle. As in the prior case, I’ll let you decide. But if these swamps do exist, they should be drained.

So, how do we drain the swamps? In the case of Washington, there are all kinds of proposed solutions—term limits for elected officials, additional ethics codes and guidelines, and “sending” the money out of Washington, to name just a few. In the case of personal swamps, we also have many proposed solutions—counseling, religion, changing jobs, and 12-step programs. How well have any of these solutions worked? Again, you be the judge.

In my opinion, despite the good intentions of those who propose these solutions, many don’t work very well because each is an external imposition. Ethics codes may or may not stop people from lying. Imposed drug rehab may clear the addictive behavior, or not. Changing the location of the money will, most likely, simply change the location of the undesirable behavior.

There is an internal timeless source from which right-thinking-right-acting flows.