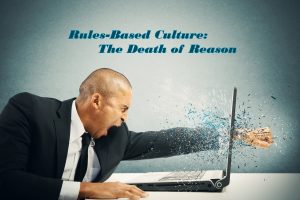 Recently, an incident involving United Airlines and a passenger sparked a raging inferno of controversial on social media and most news outlets. The controversy involved the forcible removal of the passenger from the plane during which the passenger sustained significant injuries including two lost teeth. Although there is now evidence the passenger may have brought the forcible removal on himself because of his behavior, the fact remains that the incident is a public relations nightmare for United Airlines and a damning indictment of United’s rule-based organizational culture.

This incident is unique only because of the accompanying worldwide news coverage. If we looked, we could find daily examples of the insanity that results from a rules-based culture in public school systems all across the country. We’ve seen incidents of students being expelled because they brought a butter knife in their lunch box, made a hand gesture that resembled a gun, or said something that violated the speech code. School administrators’ reaction, when questioned about the extreme nature of these responses to seemingly minor infractions, is always “We have no latitude. We have to follow exactly what the rules say.”

Welcome to the death of reason! Why is this happening? How did we get to this place where common sense seems to have taken a permanent leave of absence? You can blame it all on Francis Bacon, the originator of the scientific method. Wow! I can see the disbelief and shock in your eyes. You’re thinking, how in the world do we get from Francis Bacon and the scientific method to the complete loss of common sense in our organizational cultures?

Permit me to explain. The advent of the scientific method was celebrated, as well it should have been, as the dawning of a new age of reason among scientists, most of whom were still called philosophers at the beginning of the Enlightenment. One of the most prominent of those scientists/philosophers was mathematician René Descartes. Descartes despised the ancient way of ethical judging implicated by our human ethical intelligence because he believed it had become corrupted by the Church and others.

Joined by his bitter rival, Blaise Pascal, Descartes and others spearheaded a multi-century decline in the role ethical intelligence played in ethical judging in favor of mathematical rules-based systems. These systems are now ubiquitous as are the oftentimes insane results they produce. Proponents of these rule-based systems insist that such systems remove human prejudice and emotion from the judging process. Such systems also obliterate common sense.

So, now you know. We’re to the point where you tap a few items of information into your device, and out plops a judgment. And, like ignorant robots we embrace the judgment, even while being offended by the unintended consequences of implementing the judgment. There is a better way!

We need to reawaken, reinvigorate, and renew our human ethical intelligence. It’s a gift we all have simply because we’re human. It lives in our consciousness and becomes real in our relationships. Common sense is not dead. We simply need to call its name, and await its inevitable answer.