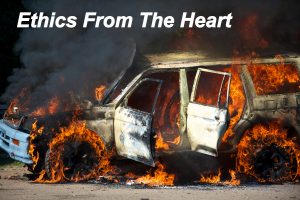 Bill Wells laid on the gurney watching the burning SUV. The acrid smoke, stench of charred hair, and his grievously burned face and seared hands reminded him of his close brush with death. Moments earlier, Bill happened upon a serious accident involving an SUV and a large truck. Smoke was pouring from under the hood of the SUV, and the gas tank was drenching the freeway with gasoline.

Without thinking, Bill leapt from his pickup, ran up to the SUV, and found an unconscious pregnant driver bleeding profusely from a gaping wound on her forehead. The heat was intense, and Bill was unable to open the door. It was locked or jammed, and the window was closed. The inside of the SUV was filling with smoke.

Bill ran back to his truck to find something to break the driver-side window on the SUV. Suddenly, flames erupted from under the hood. Bill grabbed a tire iron, ran back to the burning SUV, smashed the window, pried the door open, freed the unconscious driver from the mounting flames, and pulled her away from the now fully engulfed vehicle. Only then, did Bill realize the extent of his own burns.

Would you have emulated Bill’s actions? I hope most of us would have! The question is—did Bill’s actions flow from his head or his heart? In other words, did Bill complete a methodical intellectual probability analysis of success or failure, or of life and death?

Did he compute the amount of time he had before the vehicle blew up? Did he figure out the odds of the passenger dying? Did he complete a value analysis of his life compared to the injured passenger’s life? Of course, not! He saw. He acted! His head wasn’t involved. His actions flowed from his heart! Why?

Bill saw a fellow human in grave danger and was instantly thrust into a relationship with that fellow human—the pregnant passenger in the SUV.  Because of that relationship, Bill immediately faced an ethical dilemma—choose his certain safety or sacrifice that safety while saving the mother’s life?