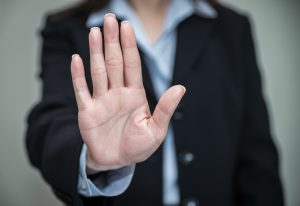 Over the last several days, we watched the failure of the United States’ House of Representatives searching for an alternative to the Affordable Care Act. After countless hours of meetings, debate, horsetrading, and political pressure, the answer was no. Regardless, of your thoughts about the merits of the proposal, it was painful to watch.

The spectacle caused me to reflect back over my career and offer an observation—after many decades of trying—we still don’t know how to get to yes in life.

Saying no is easy. In fact, for most of us, saying no is a way of life. If you’re a parent, you’ll understand this automatic response. If you have pets, like I do, you’ll also understand this default response. Why! Because most of the requests we get from our children or pets we’re unlikely to grant.

I once worked for a CEO who operated like this.

Colonel Muir prided himself on finding the “hole” in the donut, meaning the reason something wouldn’t work. After the first couple of instances where I received a “no” response before uttering even a few sentences, I asked him why he was so uninterested in my ideas.

He was eager to explain. “Son (he was many years my senior), I don’t mean to be offensive, but I am a very busy man. If I listened to every request people made of me, I’d actually have to spend valuable time figuring out why it’s a bad idea. So, I save all that time by just saying no.”

Fortunately, for the company and its shareholders, we had an active board of directors whose ideas and questions required Colonel Muir’s response. I learned a lot about getting to yes in that experience—find a director to champion my project!

So, what’s the key to getting to yes? You may be surprised to discover that it’s the same key that unlocks the functioning of our ethical intelligence, which is also the key to effective leadership—RELATIONSHIPS!

Check back next week, and I’ll provide some further insights.